Disaster, Death and the Emotions in the Shadow of the Apocalypse, 1400–1700 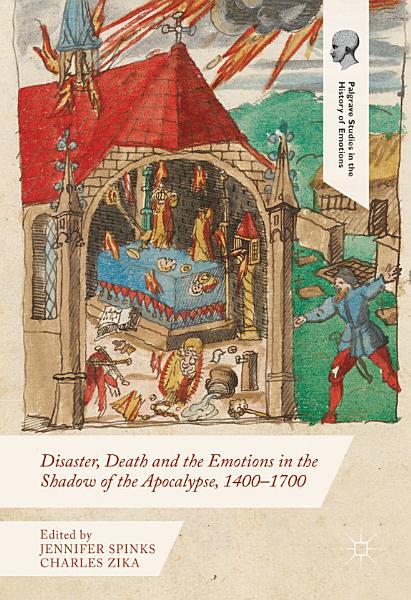 In late medieval and early modern Europe, textual and visual records of disaster and mass death allow us to encounter the intense emotions generated through the religious, providential and apocalyptic frameworks that provided these events with meaning. This collection brings together historians, art historians, and literary specialists in a cross-disciplinary collection shaped by new developments in the history of emotions. It offers a rich range of analytical frameworks and case studies, from the emotional language of divine providence to individual and communal experiences of disaster. Geographically wide-ranging, the collection also analyses many different sorts of media: from letters and diaries to broadsheets and paintings. Through these and other historical records, the contributors examine how communities and individuals experienced, responded to, recorded and managed the emotional dynamics and trauma created by dramatic events like massacres, floods, fires, earthquakes and plagues. 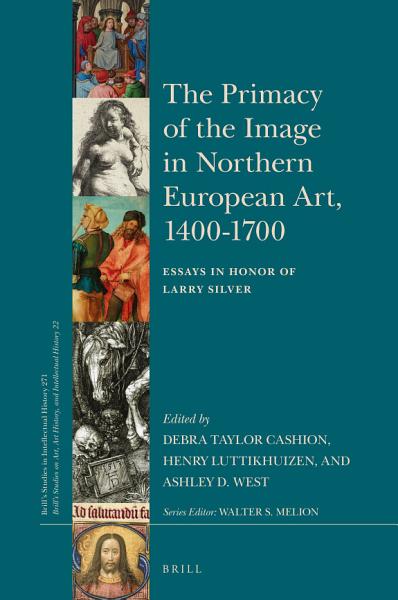 An anthology of 42 essays by distinguished scholars on current research and methodology in the art history of the late medieval and early modern periods in Germany, France, the Netherlands, and Belgium, written in tribute to Larry Silver, Farquhar Professor of the History of Art at the University of Pennsylvania. 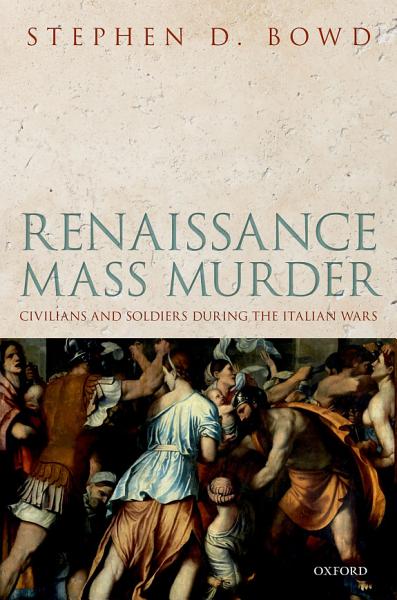 Renaissance Mass Murder explores the devastating impact of war on the men and women of the Renaissance. In contrast to the picture of balance and harmony usually associated with the Renaissance, it uncovers in forensic detail a world in which sacks of Italian cities and massacres of civilians at the hands of French, German, Spanish, Swiss, and Italian troops were regular occurrences. The arguments presented are based on a wealth of evidence - histories and chronicles, poetry and paintings, sculpture and other objects - which together provide a new and startling history of sixteenth-century Italy and a social history of the Italian Wars. It outlines how massacres happened, how princes, soldiers, lawyers, and writers justified and explained such events, and how they were represented in contemporary culture. On this basis, Renaissance Mass Murder reconstructs the terrifying individual experiences of civilians in the face of war and in doing so offers a story of human tragedy which redresses the balance of the history of the Italian Wars, and of Renaissance warfare, in favour of the civilian and away from the din of battle. This volume also places mass murder in a broader historical context and challenges claims that such violence was unusual or in decline in early modern Europe. Finally, it shows that women often suffered disproportionately from this violence and that immunity for them, as for their children, was often partially developed or poorly respected. 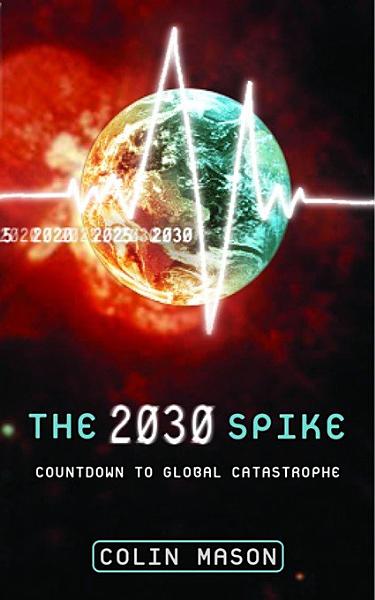 The clock is relentlessly ticking! Our world teeters on a knife-edge between a peaceful and prosperous future for all, and a dark winter of death and destruction that threatens to smother the light of civilization. Within 30 years, in the 2030 decade, six powerful 'drivers' will converge with unprecedented force in a statistical spike that could tear humanity apart and plunge the world into a new Dark Age. Depleted fuel supplies, massive population growth, poverty, global climate change, famine, growing water shortages and international lawlessness are on a crash course with potentially catastrophic consequences. In the face of both doomsaying and denial over the state of our world, Colin Mason cuts through the rhetoric and reams of conflicting data to muster the evidence to illustrate a broad picture of the world as it is, and our possible futures. Ultimately his message is clear; we must act decisively, collectively and immediately to alter the trajectory of humanity away from catastrophe. Offering over 100 priorities for immediate action, The 2030 Spike serves as a guidebook for humanity through the treacherous minefields and wastelands ahead to a bright, peaceful and prosperous future in which all humans have the opportunity to thrive and build a better civilization. This book is powerful and essential reading for all people concerned with the future of humanity and planet earth. 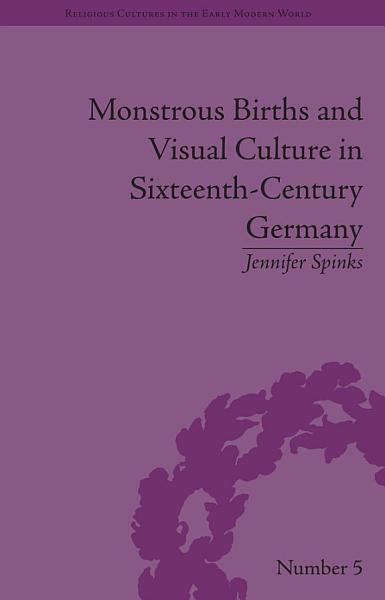 Presents an exmination of printed representations of monstrous births in German-speaking Europe from the end of the fifteenth century and through the sixteenth century, beginning with a seminal series of broadsheets from the late 1490s by humanist Sebastian Brant, and including prints by Albrecht Durer and Hans Burgkmair.

Emotions in the History of Witchcraft 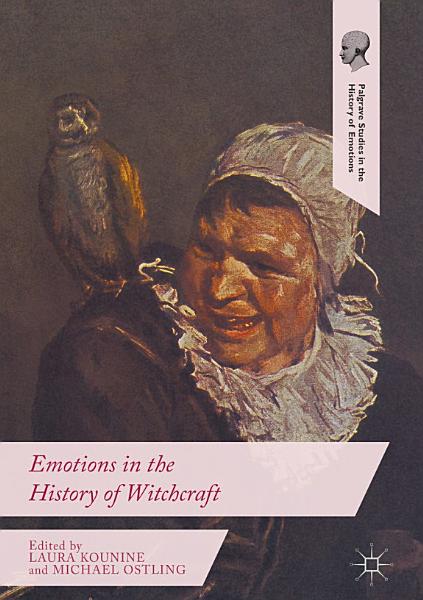 Bringing together leading historians, anthropologists, and religionists, this volume examines the unbridled passions of witchcraft from the Middle Ages to the present. Witchcraft is an intensely emotional crime, rooted in the belief that envy and spite can cause illness or even death. Witch-trials in turn are emotionally driven by the grief of alleged victims and by the fears of magistrates and demonologists. With examples ranging from Russia to New England, Germany to Cameroon, chapters cover the representation of emotional witches in demonology and art; the gendering of witchcraft as female envy or male rage; witchcraft as a form of bullying and witchcraft accusation as a form of therapy; love magic and demon-lovers; and the affective memorialization of the “Burning Times” among contemporary Pagan feminists. Wide-ranging and methodologically diverse, the book is appropriate for scholars of witchcraft, gender, and emotions; for graduate or undergraduate courses, and for the interested general reader. 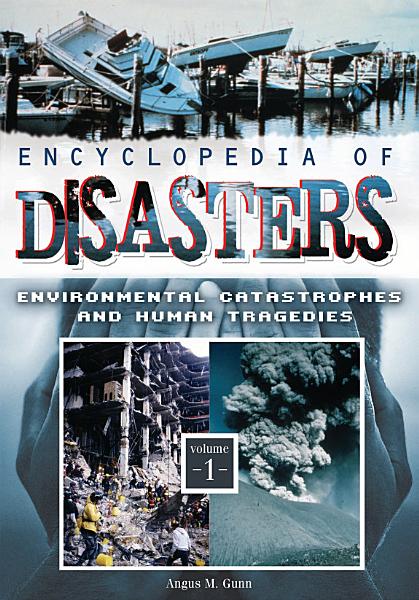 The Appearance of Witchcraft 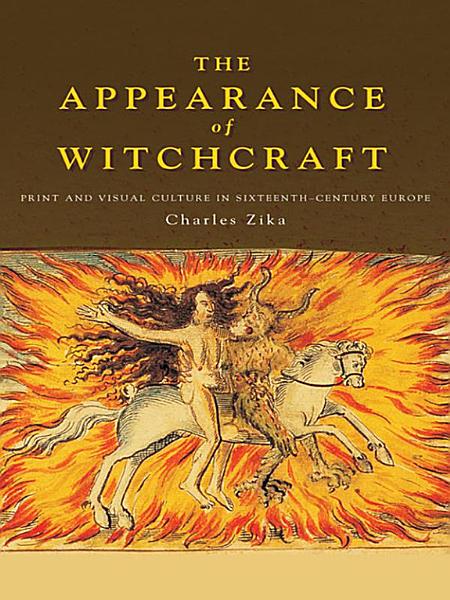 Shortlisted for the 2008 Katharine Briggs Award. For centuries the witch has been a powerful figure in the European imagination; but the creation of this figure has been hidden from our view. Charles Zika’s groundbreaking study investigates how the visual image of the witch was created in late fifteenth- and sixteenth-century Europe. He charts the development of the witch as a new visual subject, showing how the traditional imagery of magic and sorcery of medieval Europe was transformed into the sensationalist depictions of witches in the pamphlets and prints of the sixteenth century. This book shows how artists and printers across the period developed key visual codes for witchcraft, such as the cauldron and the riding of animals. It demonstrates how influential these were in creating a new iconography for representing witchcraft incorporating themes such as the power of female sexuality, male fantasy, moral reform, divine providence and punishment, the superstitions of non-Christian peoples and the cannibalism of the new world. Lavishly illustrated and encompassing in its approach, The Appearance of Witchcraft is the first systematic study of the visual representation of witchcraft in the later fifteenth and sixteenth centuries. It will give the reader a unique insight into how the image of the witch evolved in the early modern world.

Forces of Nature and Cultural Responses 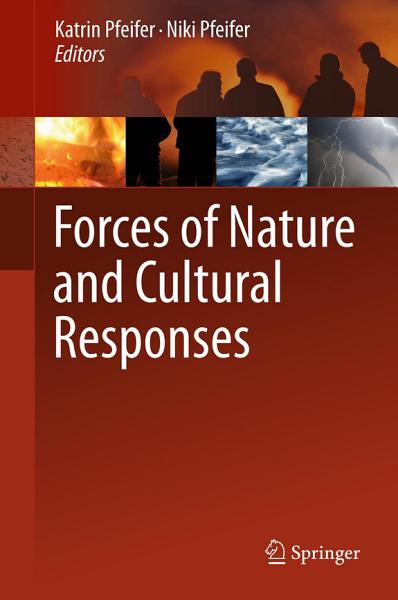 How do and how did people perceive, manage and respond to natural disasters? How are the causes of natural disasters explained in history, how are they explained today? This volume investigates relationships between forces of nature and human culture in a multidisciplinary context bridging science and the humanities. Forces of nature and cultural responses is divided into four sections: (1) ball lightnings, (2) earthquakes and tsunamis, (3) volcanic eruptions and plagues, and (4) hurricanes and floodings. Specifically, Section 1 investigates theories and case studies of ball lightning phenomena. Section 2 includes a psychological study on the impact of earthquakes on academic performance, a study on tsunami vulnerability and recovery strategies in Thailand and a study on the social and economic aftermaths of a tsunami and a hurricane in Hawaii. Section 3 consists of a chapter on volcanic eruptions and plagues as well as cultural responses in Ancient Times and a study on contemporary vulnerability and resilience under chronic volcanic eruptions. Section 4 investigates the impact of hurricane Katrina on the current jazz scene in New Orleans and cultural responses to floodings in The Netherlands in Early Modern Times. 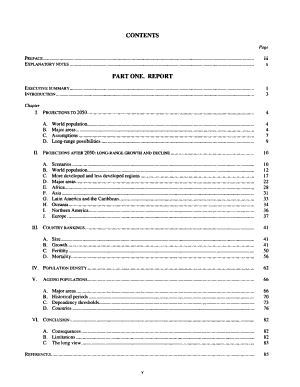 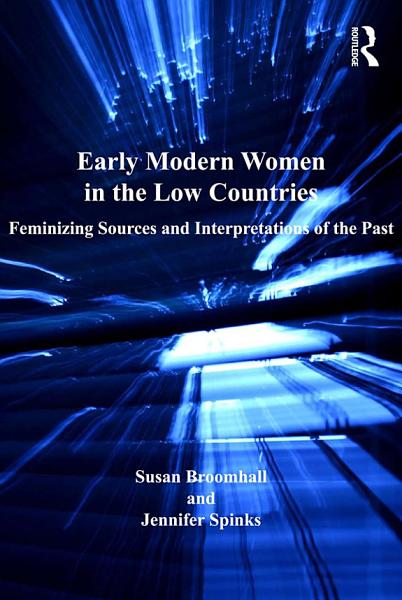 Combining historical, historiographical, museological, and touristic analysis, this study investigates how late medieval and early modern women of the Low Countries expressed themselves through texts, art, architecture and material objects, how they were represented by contemporaries, and how they have been interpreted in modern academic and popular contexts. Broomhall and Spinks analyse late medieval and early modern women's opportunities to narrate their experiences and ideas, as well as the processes that have shaped their representation in the heritage and cultural tourism of the Netherlands and Belgium today. The authors study female-authored objects such as familial and political letters, dolls' houses, account books; visual sources, funeral monuments, and buildings commissioned by female patrons; and further artworks as well as heritage sites, streetscapes, souvenirs and clothing with gendered historical resonances. Employing an innovative range of materials from written sources to artworks, material objects, heritage sites and urban precincts, the authors argue that interpretations of late medieval and early modern women's experiences by historians and art scholars interact with presentations by cultural and heritage tourism providers in significant ways that deserve closer interrogation by feminist researchers.

The Burdens of Disease 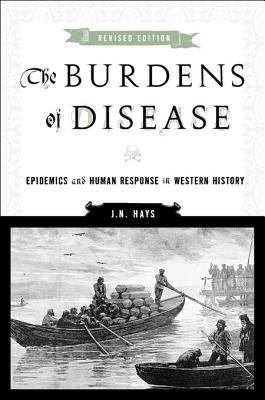 A review of the original edition of The Burdens of Disease that appeared in ISIS stated, "Hays has written a remarkable book. He too has a message: That epidemics are primarily dependent on poverty and that the West has consistently refused to accept this." This revised edition confirms the book's timely value and provides a sweeping approach to the history of disease. In this updated volume, with revisions and additions to the original content, including the evolution of drug-resistant diseases and expanded coverage of HIV/AIDS, along with recent data on mortality figures and other relevant statistics, J. N. Hays chronicles perceptions and responses to plague and pestilence over two thousand years of western history. Disease is framed as a multidimensional construct, situated at the intersection of history, politics, culture, and medicine, and rooted in mentalities and social relations as much as in biological conditions of pathology. This revised edition of The Burdens of Disease also studies the victims of epidemics, paying close attention to the relationships among poverty, power, and disease.

Religion, the Supernatural and Visual Culture in Early Modern Europe 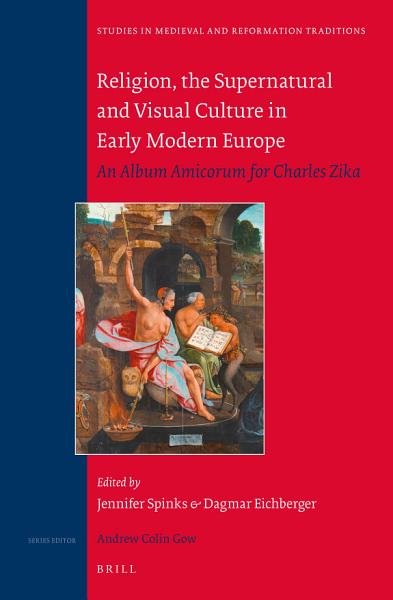 This volume brings together some of the most exciting current scholarship on these themes. This interdisciplinary and geographically broad-ranging volume pays tribute to the ground-breaking work of Charles Zika. 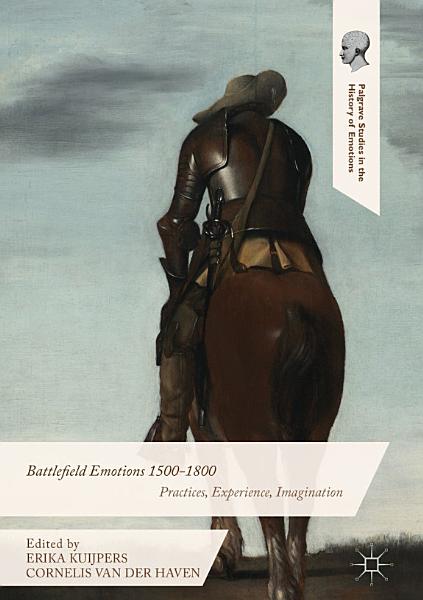 The Pandemic Century: One Hundred Years of Panic, Hysteria, and Hubris 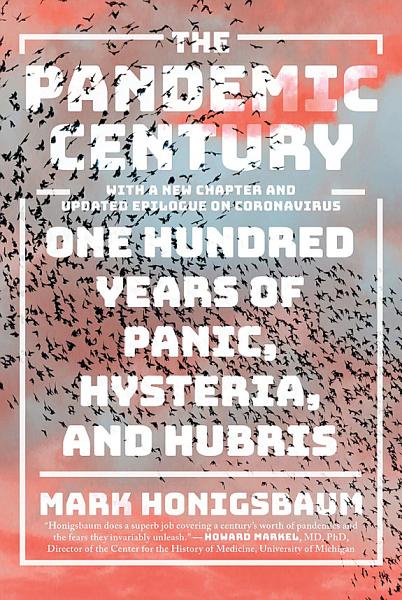 With a New Chapter and Updated Epilogue on Coronavirus A Financial Times Best Health Book of 2019 and a New York Times Book Review Editors’ Choice "Honigsbaum does a superb job covering a century’s worth of pandemics and the fears they invariably unleash." —Howard Markel, MD, PhD, director of the Center for the History of Medicine, University of Michigan How can we understand the COVID-19 pandemic? Ever since the 1918 Spanish influenza pandemic, scientists have dreamed of preventing such catastrophic outbreaks of infectious disease. Yet despite a century of medical progress, viral and bacterial disasters continue to take us by surprise, inciting panic and dominating news cycles. In The Pandemic Century, a lively account of scares both infamous and less known, medical historian Mark Honigsbaum combines reportage with the history of science and medical sociology to artfully reconstruct epidemiological mysteries and the ecology of infectious diseases. We meet dedicated disease detectives, obstructive or incompetent public health officials, and brilliant scientists often blinded by their own knowledge of bacteria and viruses—and see how fear of disease often exacerbates racial, religious, and ethnic tensions. Now updated with a new chapter and epilogue.